We have spent a fun couple of months studying the body - all the girls have joined in and made their own body and the older 2 have written up the experiments and activities.

We loosely based our lesson plan on this book My Body - teacher created resources the basic idea is you draw an outline of the body and stick on pictures of the organs, muscles and skeleton. Each organ picture comes with an explanation. This was a good base line to start from and for younger kids it would have been enough but we are working with older girls as well so we added different experiments/activities and did some additional research using various books and Brainpop 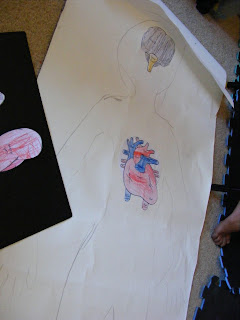 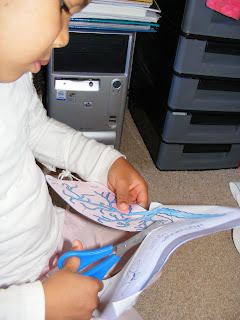 Our activities:
Brain - looked at a walnut to show what a brain looks like and how it is encased in a hard shell (skull). Pre-recorded an excellent documentary called 'How our brain works' BBC which we watched and discussed. It used CGI to show which parts of the brain reacted in different circumstances and how our brain can trick us.

Heart - heaving heart kit from Horrible Science - this activity shows how the heart valves operate, was messy but fun.
Also did some heart rate activities - using a stethoscope to count heart beats for 30 secs resting and after exercise. Finished with a circulatory animation from Brainpop.

Kidneys - turn away if you are queasy - the girls asked for a real kidney they could dissect. 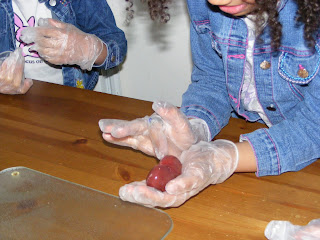 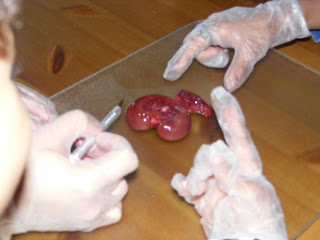 Followed this up with drawing a kidney and a diagram of the urinary system. 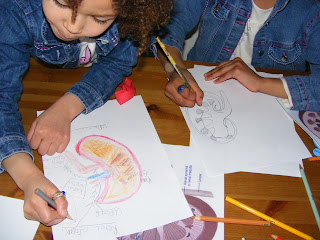 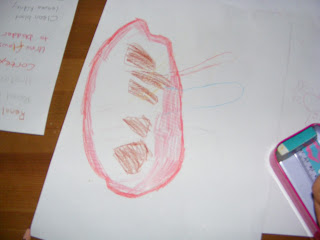 (DD4's effort)
We discussed how kidneys filter our blood and used a coffee filter to filter sand from water. 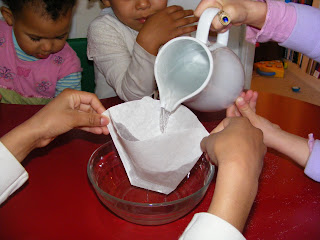 Spleen/Pancreas/Gall Bladder - couldn't come up with any :(

Skeleton - used some chicken bones, snapped one in half and looked at the marrow and structure of the bone alongside a great animation from Brainpop. 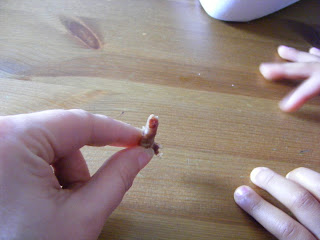 The favourite old standby of popping a bone in vinegar to remove the calcium and being left with a bendy bone. Various games to identify the bones and their names. The younger girls also made plasticine people around toothpick skeletons to enforce the concept of the skeletons providing structure to our bodies.

Reproductive Organs - watched a great documentary showing the stages of foetal development in animals - showed the sperm meeting the egg, the eggs journey to the womb and the fetuses growth.

Muscles - relied on Brainpop for this one as the animation shows how muscles work in pairs, one contracting whilst the other relaxes, to create movement. We did ask them to hold their leg and identify which muscle caused the leg to bend and which caused the leg to straighten. After this I asked them to guess which muscle would bend or straighten their arms based on what they had learned from their legs.

Stomach - another great activity kit from Horrible Science - Sick Stomach. as you can guess we made our own vomit  :(  it even smelled realistic!
For those willing to try the recipe is 50ml water, 50ml milk (together they represent mucin in saliva) half a mashed banana, half a carrot (finely chopped), 1 digestive biscuit, vinegar and 1 teaspoon Bicarbonate of Soda. 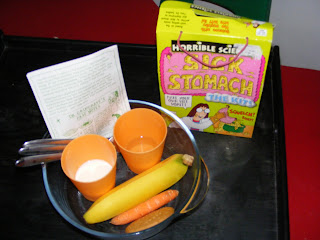 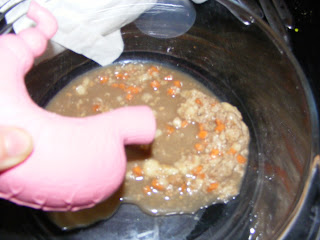 Small & Large Intestine - used a 1.5m piece of thick rope (woolen belt) and a 7m piece of wool to explain the size difference and asked which they thought was the large intestine and why. Also watched another great animation from Brainpop. 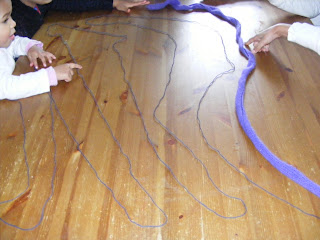 (we also took this out in the garden to comapre the lengths but didn't manage to get a photo)
Liver - another dissection.

Lungs - created our own 'lungs in a bottle'. A very simple activity to show the importance of our diaphragm in breathing. Basically its 2 balloons attached to bendy straws inserted into half a plastic bottle, a further balloon is stretched over the base of the bottle to act as the diaphragm. the child is asked to blow in the straws to inflate the lungs which is really hard to do, when they realise that it can't be done they are asked to push the diaphragm in and out and see what happens to the lungs - when the diaphragm moves the air pressure is forced in and out of the lungs inflating or deflating them and breathing is mimicked.(this only works if the aparatus is airtight so use a sturdy bottle and plenty of blue tac to cover any gaps) 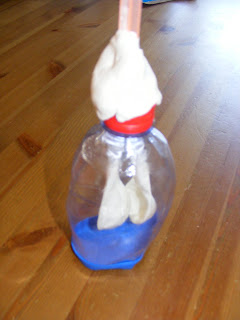 To finish we spent some time talking about how to care for our bodies - sleep habits, food etc. and watched a couple more animations from Brainpop - the girls favourite was 'Bogies'  (need I say more?!?) and mine was 'The Human Body' which discussed each system and how it interrelates.
Posted by Zelda at 07:17
Email ThisBlogThis!Share to TwitterShare to FacebookShare to Pinterest
Labels: science

WOW! This is so great! I am so glad I found you on HHH! We are beginning our unit on the Human body and I have been researching fun activities for my children and our creation club! NOw, you have done all of that for me. I love blogging and following other's.....keeps me refreshed! True sense of community helping each other. Can I ask...where did you get the kidney??

Stop by and let me know, please!
Rebecca
momsmustardseeds.blogspot.com

These are great activities! Very nice scientific drawings by your girls! Stopping by on the Hip Homeschool Hop from Homeschool Science- new follower, too!

It sounds like you have been busy doing so much fun and cool stuff on the body! I love the drawings too! I might be doing Anatomy using Apologia next year so I want to keep this post of yours in mind! Thanks for sharing it on NOBH!

The vomit looks a little to realistic for me:) My kids are dying to dissect something but I am waiting til we can do it outside. I was thinking of a fish but maybe a body organ would be better

What a wonderful post. Loved the part about the stomach where you had the opportunity to talk about heart burn. lol Thank you for sharing this. I will have to try some of the experiments with my son since we are studying the human body now.

I am just preparing to do some body units with my girl, too; thanks for this post, it will help me so much! And question (already asked) - where did you find the kidney???? A butcher?

I spoke to our local butcher and explained what I hoped to do. He was really helpful and managed to get hold of all the organs I needed. NB lambs organs are best as they are an easy size to manage.

I just love what you offer on your blog... COOL STUFF!!! I have your button on my blog and will soon be adding some posts linking to you. We are also working on Human Body and was thinking if the Teacher Created Book is a good buy? Does it suggest experiments too or just the cut outs and explanations. Can't wait to finish our Human Body Unit Study and post about it. For now you might want check our Egg Unit Study http://umamahlearningacademy.blogspot.com/2011/02/egg-unit-study.html
I would love to know what you think.

I do like the book but it just contains the picture of the organ. it's posiion in the body and an understandable explanation for children. The activities I had to create or borrow from various places.

BTW really liked the ideas in your egg unit and will borow a few for our egg overview in April.

Thanks for the reply Zelda, I have used print outs from http://www.exploringnature.org/db/detail.php?dbID=24&detID=687 for life size skeleton and the digestive system. Will be done with our Human Body Unit in a month (hopefully) so will share in detail then.

I am glad you liked some things from the egg unit study. Would love to see what you will do.

Thank you for sharing so many things you did with this unit. We are studying human anatomy this year for science.
Thanks, too, for joining the blog hop.

Actually, Many people consider the human body
to be a work of art. Because of this, there are many ways that this work of art can be enhanced even farther. Some people use bodybuilding to shape and enhance the human body .For others, the art of body language is something that can be used for enhancement. Still others rely on body paint to decorate and enhance the body .